Are You Suffering From Diabetic Wounds That Doesn’t Seem To Heal as well as Your Child Been Diagnosed With Autism? Hyperbaric Oxygen Therapy Can Help!

What is Hyperbaric Oxygen Therapy?

Hyperbaric Oxygen Therapy (HBO) provides you with 100% oxygen (unlike the 21% oxygen found in the air we breathe) in a chamber or compartment with increased pressure. 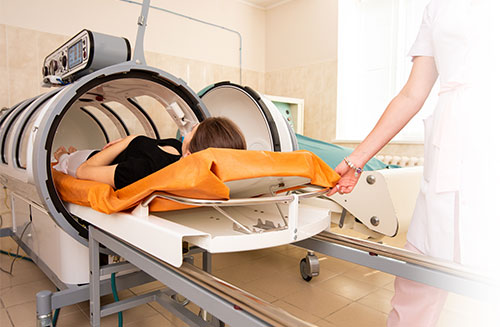 By inhaling 100% oxygen at elevated pressure (2 to 3 times than normal), 20 times more oxygen will transport in the blood and deliver to injured organs and tissue. This will lead to accelerated healing along with other beneficial effects.

What Conditions Can Benefit from Hyperbaric Oxygen Therapy?

How Will I Feel During Hyperbaric Oxygen Therapy?

HBO therapy is normally pain-free. In a relaxed manner, you will be lying in a glass-covered chamber (several minutes to a couple of hours).

At the beginning and end of the treatment, you will notice a sense of fullness in your ears as the pressure will increase. This feeling is comparable to that which is felt while flying in an airplane or diving underwater.

Our staff will teach you a simple technique to relieve ear pressure and avoid any uneasiness.

A few patients may feel light-headed after the therapy that could last a few minutes.

How Many Treatments Will I Need?

You may need to have multiple treatments. The number of treatments will determine your particular condition and response to HBO therapy.

Usually, emergency conditions require 1 to 2 treatments in the first week. Long-standing infections and wounds might require 20 – 60 treatments throughout several weeks.

Why So Many Treatments?

The most growth takes place between treatments 18 – 23, at the time when the number of blood vessels grows to 80% of normal tissue.

For several patients, it’s like they never had radiation. For diabetic patients, HBO treatment generally minimizes the need for lower extremity amputation.

Increase Your Chances of Healing

Uncontrolled diabetes and hypertension offset the effects of HBO therapy, delaying the growth of new blood vessels. Cigarette smoking also reduces the effectiveness of HBO therapy by decreasing the amount of oxygen reaching the body tissues.

Getting every scheduled HBO therapy matters, however, the patient’s current health condition may not support adequate treatment. A patient with the following conditions should consult with one of our staff before receiving treatment.

The moment a normal child concentrates on an activity or delivers a speech, the brain is performing extra work and there is an increase in blood flow to the brain. This activity allows delivery of more oxygen and glucose, supplying the brain cells their required energy to perform their task.

A number of studies have shown that the opposite happens in autistic children. These children have a decreased blood flow to start with. So when their brain is attempting to execute a task. It is like generating speech or focusing, then blood flow does not increase providing brain cells the needed oxygen and glucose.

This evidence of damage is a result of impaired oxygen delivery resulting from hypoperfusion.

Brain hypoperfusion is simply decreased blood flow to the brain. There are several studies in the medical literature demonstrating hypoperfusion in autistic children. Studies have also shown that the hypoperfusion generally worsened with the age of the child, getting more profound in older children. The diminished blood flow can view with a clear connection to several core autistic symptoms (behavior).