Facial Feminization Surgery is the perfect gift an MTF Transgender can have to uncover the ultimate womanish version of herself!

What is Facial Feminization Surgery? 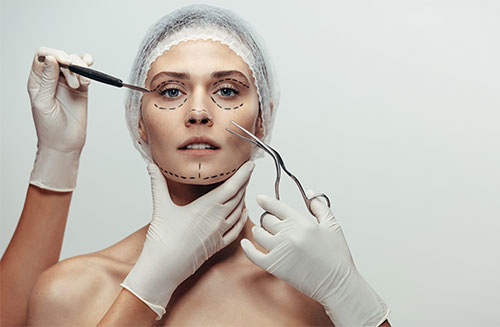 As the face is always noticed first, facial feminization surgery will increase the probability that you will perceive as female by others, especially yourself. To sum up, this is the final step in the full transition of the individual.

Choosing the right surgeon with the right skill set is the most important decision you will ever make. And even more important than the procedure itself. While most cosmetic surgeons know technically what is are requirements for facial feminization, they may not understand the subtle elements of what truly makes a face “womanish” or “ladylike” versus what makes a face simply beautiful.

Importantly, you have to research and look for a surgeon who thoroughly understands the science behind male vs. female faces. Because having an extensive grasp of the aesthetic traits of what embodies gender is important.

Finally, don’t be the patient who comes for corrective surgery – research your surgeon!

Every face is unique and requires different procedures. Your surgeon will evaluate the photos you send through our no-cost virtual consultation. Then your surgeon, by way of our virtual consultants, will email you back and explain which surgical procedures are likely to make your face more feminine and beautiful.

The following are cosmetic procedures for facial feminization surgery: 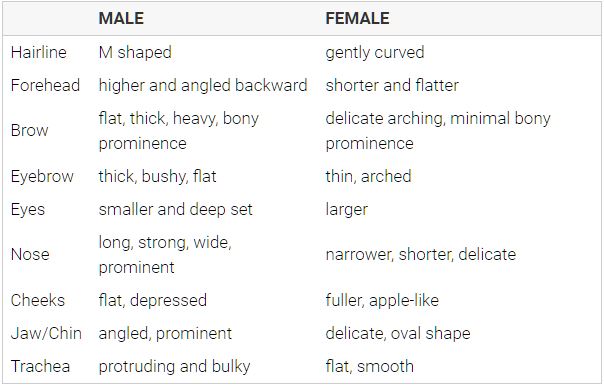 To feminize, and sometimes rejuvenate your forehead, your surgeon will perform a procedure called forehead lift, also known as a brow lift or browplasty. The eyebrows play a role in the expression of emotions and feelings in men and women. But that’s not all, they take part in making the eyes appear either male or female.

If your skin in the cheek area has started to sag before your facial skeleton feminized, you may need a Mid-facelift also called a Cheek lift or Rhytidoplasty. Feminization of the facial skeleton reduces its size and therefore leaves an extra amount of skin and soft tissues over it.

When you’re young, chances are high that the soft tissues will re-adjust over the restructured bone preventing saggy cheeks, revealing the new female outline of the remodeled facial skeleton. If you’re a bit older, your soft tissues may not be able to re-adjust to the new facial bone so a mid-facelift is performed to “lift” the mid-face area to bring out the shape of the jaw and chin bones and grants your face additional years of youth for you to enjoy.

Therefore, the more advanced the signs of aging are at the time of the cheek lift, or the greater the quantity of bone removed during the feminization of the facial bones, the more remarkable the rejuvenating effect will be. And lastly, this procedure is usually the last process in facial feminization.

Loosening or sagging of skin in the neck is among the first signs of aging. Over time, gravity stretches the tissues of the neck and only a Neck Lift will be able to put them back into place. In most cases, it usually performed in combination with a facelift because they complement each other beautifully. But it oftentimes performed alone when the neck starts to demand attention before the face does.

Additionally, it adjusts the skin to the new and reduced facial skeleton obtained during feminization surgery. It tightens the skin which has now become lax as a result of getting older or due to heredity.

Blepharoplasty is sometimes included as part of facial feminization surgery. Upper or lower blepharoplasty is more of a rejuvenation process than a feminizing one but a youthful face is likely to appear more feminine than an older one. An upper blepharoplasty decreases the amount of tissue above the eyelid – usually cutting off loose skin or a pocket of fat or both. It helps uncover more of the upper eyelids.

On the other hand, lower blepharoplasty is perfect for individuals who have bags under their eyes. It cuts off extra skin and fat that is causing the bags.

The aim of feminizing rhinoplasty is to decrease the overall size of the nose. While adjusting its shape and profile to make it look more feminine. Feminine appearance can help by narrowing and/or modifying the nose internally, and/or reshaping and shifting the nose cartilage.

Generally, the shape and size of the male nose are normally wider, larger, and more angular compared to a woman. The bridge of the male nose can also be wider, straighter, and more arched while the tip of women’s noses can also point upwards more frequently than men. But the greatest challenge with feminizing Rhinoplasty is making certain that your nose will stay in harmony with the rest of your facial features.

Alarplasty is a quick and minor surgery performed to narrow the span of nostrils. This procedure is also done to decrease the thickness of the ala ( of the nose). Additionally, it is often done together with Rhinoplasty to enhance the overall aesthetic results, but its main goal is to feminize the nose while appearing compatible with the rest of the facial features.

Structuring a delicate, symmetric nasal tip which has the precise projection, rotation and proportion to the different aspects of the nose is a key point in a successful Rhinoplasty. The nasal tip is the center point that is noted first thing and has to be aesthetically well-formed for the overall appearance of the nose to appear more feminine and attractive.

The eyebrows tend to be among the primary areas in presenting gender. As shown in the table above, there are obvious distinctions in eyebrow shape between men and women. Brow ridges are bone areas covered by the whole eyebrows. Their lower margin sinks inward forming the eye sockets, and the upper margins join with the frontal bone to form a section of the forehead.

When viewed from the side, brow ridges are the most prominent part of the forehead. Generally, their shape is determined by the individual’s genes. But sometimes, trauma or endocrinal disease can cause thickening of the ridges. Since prominent brow ridges tend to make individuals appear masculine, most MTF transgenders would think about undergoing brow reduction to scrape off the protrusive ridge surface. This would soften the shape of the eyebrows and make the forehead look more feminine.

The cheeks of females are usually more prominent and clearly-defined compared to males. Additionally, they include a proportionally bigger area of the face. These days there is an array of synthetic permanent implants which can increase the size of the cheeks. The most common implant manufactured by using a flexible solid silicone. To insert it, your surgeon will create an incision for each implant. Created incisions will be along the upper gums and the created pocket is behind the muscles of each cheek.

Feminization of the cheeks involves either:

In most cases, the male jaw is shaped wider and higher compared to the female jaw. Males typically carry wider, heavier-set jawlines unlike females with a heavier mid-body area along with a sharper angle between the chin and jaw including a flat base, presenting a male jawline a recognized square look.

The jawlines of females usually have rounder edges, tend to be more tapered and pointed – even in cases when the jawline may appear square. Mandible Angle Reduction is performed to transform and feminize the prominent male jawlines.

The backside of the male jaw is often reshaped to be rounder and smoother to appear more feminine. It is often shaved off along the lower margin of the jaw to have the jawline look narrower.

The general appearance and shape of the chin is a crucial factor of gender recognition. Typically, chins of males are usually angular, wider, longer, and squarer with a flat base, while chins of females are often smoother, more rounded, and softer in appearance.

Some individuals have a weak, receding chin and chin implants can correct it, making the chin more projecting and improving balance to the facial features.

The Adam’s apple is a unique feature of adult males. If you have a prominent Adam’s apple that is constantly causing you embarrassment, you can undergo Adam’s Apple Shaving or a Thyroid Cartilage Reduction to shave off the maximum allowed amount of thyroid prominence. The outcome is having the appearance of a female neck.